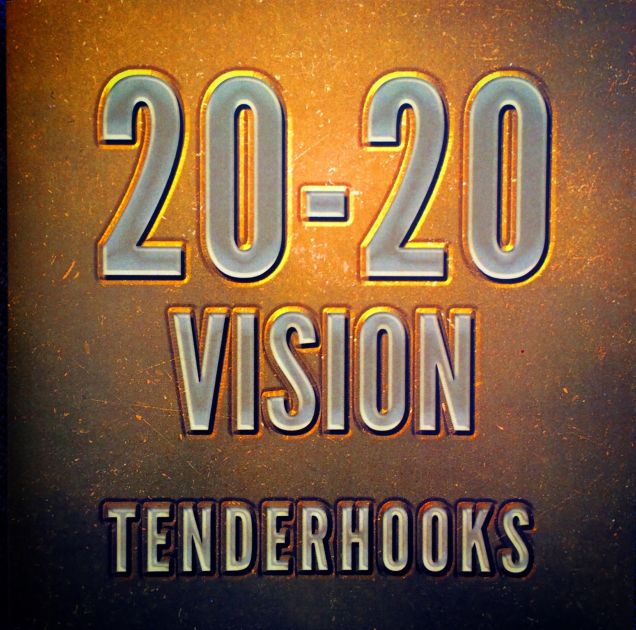 This seventh album for the eternally talented ‘alt rock pop blues’ (and a few more genres too) band, ‘Tenderhooks’, is as slick and diverse as every other one I have been fortunate enough to review.

Opening with the alluring ‘Prelude’, purely instrumental with initially just a solo piano, before being joined by a sax, one certainly feels drawn in to listen on, as it seamlessly drifts into ‘Bright Lights City’, a chilled number reminiscent of ‘80s disco sounds, with a hint of soul.

The title track of the album follows. Unlike the usual Tenderhooks fare, which tends towards ‘feelgood’ or narrative, ‘20-20 Vision’ hovers on the periphery of politics. Referencing environmental concerns, hats off to singer/songwriter Markus Leinweber for the musical reminder that the onus is on us for the well-being of our majestic planet.

‘This’n’That’, with its bassy reggae/ska feel throughout, will bring you back to a wonderfully mellow mood, especially if – like me – you were a fan of ‘The Specials’ back in the day. Another charming piano intro heralds ‘Run into the Sun’ next; with some beautifully clear vocals from Markus and some rousing guitar solos into the mix, this gentle rock song earns its place as one of my favourites.

Changing the tempo considerably is the lively ‘Thinking Cap’, followed by ‘Cell Number 9’. The latter is dominated by skilled piano playing and tells the dark story of a wrongly convicted inmate. The minor key and choir of humming backing singers adds a powerful poignancy to the song. If you like show tunes, this is for you; it definitely feels like a song from a score for a gritty modern musical.

‘Smash It’ is another lively offering, displaying the vast array of instruments skillfully played by the Tenderhooks musicians. ‘No-one Gives a Monkies’ – definite blast from an ‘80s past with a bouncy ska/Britpop mix – precedes ‘Mermaids’, which is a gentle and quirky mermaid story to wrap up this energetic album.

Lucky me – I attended the launch party AND I have the album. But the fabulous news for you, is that it is now available on many digital platforms, including Spotify. 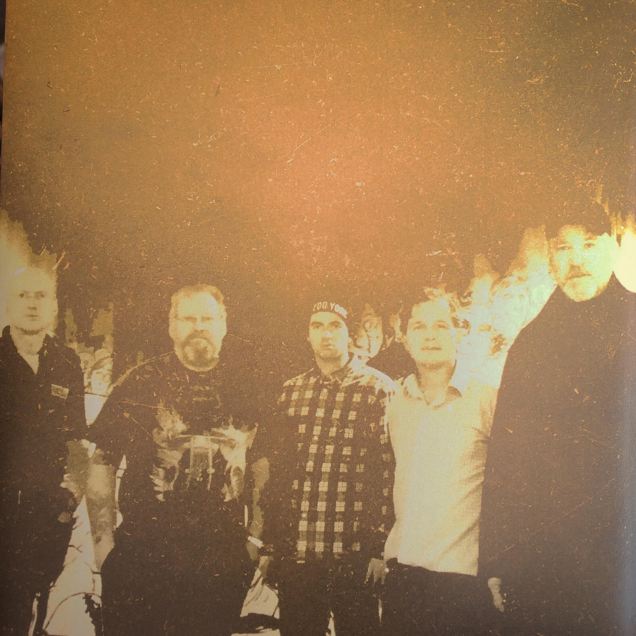 Tenderhooks’ seventh album is available on many digital platforms, including Spotify. 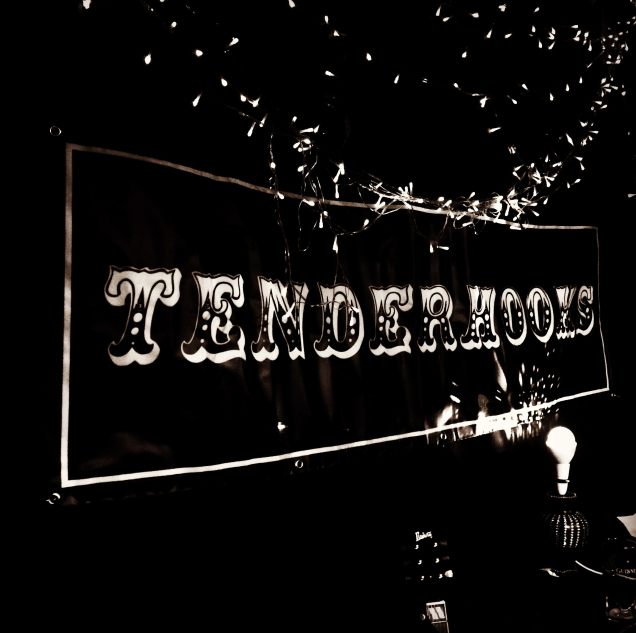 Little did I know, when I popped along to one of my favourite Brighton (well, Hove actually) venues on March 7th, to an album launch party, it would be my last night out for … well – who knows when? I’m glad because firstly, it was at ‘The Brunswick’ which looks like a fairy-tale castle on the outside and is so classically timeless, with sturdy wooden tables, real people and good beer, that it could pass for a castle on the inside too. I’m also glad because it was to see the eternally talented ‘Tenderhooks’, so obviously, it was a rocking night watching this ‘alt rock pop blues’ (and dare I say a few more genres too) band, launch their 7th album: ’20-20 Vision’.

‘The Brunswick’ houses two venues: one on the right as you walk in and another downstairs (‘The Cellar Bar’). Readers of my blog of old will know the former as ‘The Cabaret Bar’, as this is what I named it when first I wandered in one summer night for Open Mic, on account of there being a stage and little tables with cloths and pretty candles burning. ‘Tenderhooks’ performed in this bar but not before whetting our party spirit with the delightful ‘Across the Sea’: a duo comprising a female powerhouse of a singer and a perfectionist of a male guitarist who also boasted some enviable locks. Well-placed, just before the main event, were ‘The DBs’ who evoked the same carefree vibe as ‘Tenderhooks’ themselves. Personally loved the folkiness of the fiddle and the jazziness of the sax.

The party started aptly with Tenderhooks’ ‘Bright Lights City’: ’80s disco with a hint of soul, before the title track itself of the album: ‘20-20 Vision’. Unlike the usual Tenderhooks fare, which tends to either be ‘feelgood’ or narrative, this song hovers on the periphery of politics. Referencing environmental concerns, (baseball) hats off to singer/songwriter Markus for the musical reminder that the onus is on us for the well-being of our majestic planet.

A charming piano intro, courtesy of Markus, heralded ‘Run into the Sun’ next; with some beautifully clear vocals from Markus also and some rousing guitar solos into the mix, this mellow rock song earned its place as my favourite.

Continuing with the buoyant mood was ‘Thinking Cap’, followed by ‘Smash It!’, both putting on show the unending array of instruments being energetically bashed and plucked for our entertainment.

‘No-one Gives a Monkies’ – definite blast from an ‘80s past with a bouncy ska/Britpop mix – preceded ‘Mermaids’: a quirky and gentle story about mermaids, which, as we all know, exist ‘at the bottom of the sea’.

And thus ended the album launch … I’m lucky to be in possession of Tenderhooks’ latest offering, but the good news for you is that it is now available on many digital platforms, including Spotify.

Actually, it didn’t end there … we were treated to a few more favourites from this happy, slick band because Markus is the ultimate showman, in the best possible sense of the word.

‘20-20 Vision’ is Tenderhooks’ 7th album and is now available on many digital platforms, including Spotify. 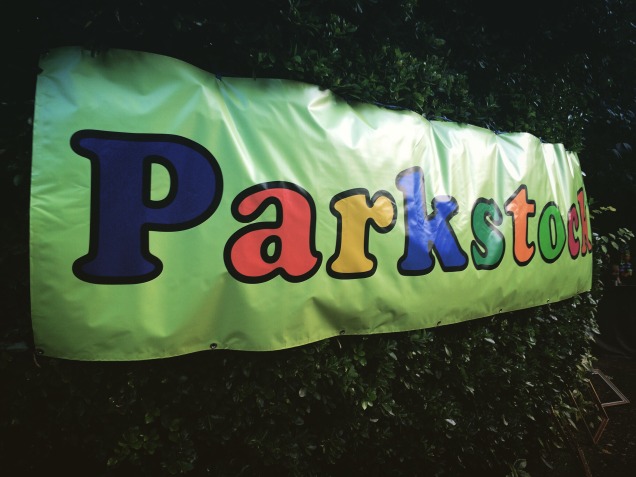 When Markus Napier of ‘Tenderhooks’ fame invited me along to Parkstock, a local music festival, shamefully, I had to admit that this was a new ‘stock’ to my ears. He gave me an address on whose door I was to knock in order to gain entry to this clandestine event and so early in the evening on the 7th of September, I found myself on the doorstep of a grand looking abode in the centre of town. Ten minutes later I was joined by more potential festival-goers, to whom I explained that no-one seemed to be answering. Fortunately, they knew all the right people and after a phone call or two, I gained access to the portal (aka someone’s house) which would transport me to Parkstock. I felt a little like Alice in Wonderland … or Lucy finding Narnia through a wardrobe, as I walked through a fairly regular house in order to gain entry to the magnificently lush gardens which are normally exclusive to the residents within the surrounding houses.

‘Tenderhooks’ had just begun their set and as I took in the view of this little pocket of countryside in the middle of the city, frontman Markus greeted me warmly over the mic and so my evening began. In-between buying seven sweets for a pound and nosing around the vegan food stall, I was fortunate to be serenaded, along with the other festival-goers, by some of Tenderhooks’ finest musical fare. One of my favourites – the narrative song ‘Yolena’, with its catchy chorus and Britpop story-telling – was one of the first; followed by the rock ‘n’ roll ‘Russell You Up’; then the rousing anthem ‘Rule the World’. Reminding us of the power over our own destiny, it also reminded me how diverse ‘Tenderhooks’ are, with their shifting genres, tempos and topics.

As the sun dipped down, the fairy lights throughout the gardens came into their own and the mood settled into that of a Saturday night vibe; people started to dance on the grass in front of the band who were housed under pretty canvas. I couldn’t resist wandering along paths and around trees to take in the natural environment, so I did just that, swinging by the bar en route to collect a beer. But on my travels I could still hear the upbeat tunes from Tenderhooks with their quirky stories: ‘Mermaid’, ‘Never Stop Chasing Your Dreams’ and ‘No-one Gives a Monkeys’ to name a few.

Having watched this infintely talented band quite a few times now, I know to expect a great standard of entertainment at their gigs. Always they have new songs on offer, healthily mixed up with some of the familiar ones. Tenderhooks’ genre-hopping, from rock to jazz, classical to ska and even more, means that there’s certainly something for everyone to like … and judging by the audience reaction, everyone did like them – a lot!

‘Markus and the Tenderhooks’ are a tangible representation of shifting dynamics in music. Just when you think you’ve identified their genre as ‘jazz meets ska meets Britpop’, they open their latest album, ‘North Star’, with a song title that is clearly classical. The magical ‘Prelude in Blue’, gives us Markus Napier’s rich tones narrating a snippet of a story against a backdrop of delightful piano sounds. Occasional phrases reminiscent of familiar classical pieces give an Oriental feel, adding to the mystery, especially with the spoken references to jazz clubs on Broadway.

A leaning towards country vibes brings us the second track, ‘Mother Dear’, which manages to impart a child’s tenderness towards his mother without the schmaltz.

Drawing you in with some stirring drum beats, you could be forgiven for thinking that you’re in for a rousing anthem, in the opening seconds of third track ‘Yolena’. But in true Tenderhooks style, the rug is pulled out from under you as frontman Markus Napier whisks you back to the ‘80s with a slick Britpop-esque commentary. With the afore-mentioned drumbeats and some pretty string sounds, this is a very musical song, despite the whole story being presented via the spoken word; the whole story being the lowdown on the intriguing and enigmatic Yolena. The latter is the narrator’s neighbour and the object of his affection in a remote, adoring manner and indeed, the catchy chorus is a chant of her name with the fun sounds of a tambourine in the background. With his slightly obtuse, yet very entertaining flair for writing clearly evident throughout the song, Napier has every art form – music, writing, acting – covered in just a few minutes and with its clean, abrupt finish, displays an easy flawlessness.

Definite shades of Billy Bragg are evident in the next track on this musical feast: ‘Little Stunner’, only to be followed by the more reflective ‘Sleep Tight’, which, as its name suggests, has qualities of a lullaby – but on the outside, as you’ll find a more upbeat element in the middle.

The second half of the album kicks off with the rock’n’roll ‘Russell You Up’, before sliding into the easy reggae beats of the aptly-named ‘Ease Yourself’.

Markus’s trademark saxophone – one of my favourite sounds of this band – makes an appearance in ‘Rubber Necking’ before the penultimate rock track ‘Cry Cry Cry’.

The final track – the album’s namesake – ‘North Star’, seems to be a revelation of the first track, ‘Prelude in Blue’, which is clearly a teaser. With keys, strings and wind, there is nothing short of a full orchestra supporting this enchanting number whose lyrics reveal more to the story of which we only receive hints at the start of the album. If ‘Prelude in Blue’ is pretty, ‘North Star’ is stunning; with minor keys building up to a crescendo of harmony, it is a fitting way to round off an album packed with a dynamic variety of musical genres.