Little did I know, when I popped along to one of my favourite Brighton (well, Hove actually) venues on March 7th, to an album launch party, it would be my last night out for … well – who knows when? I’m glad because firstly, it was at ‘The Brunswick’ which looks like a fairy-tale castle on the outside and is so classically timeless, with sturdy wooden tables, real people and good beer, that it could pass for a castle on the inside too. I’m also glad because it was to see the eternally talented ‘Tenderhooks’, so obviously, it was a rocking night watching this ‘alt rock pop blues’ (and dare I say a few more genres too) band, launch their 7th album: ’20-20 Vision’.

‘The Brunswick’ houses two venues: one on the right as you walk in and another downstairs (‘The Cellar Bar’). Readers of my blog of old will know the former as ‘The Cabaret Bar’, as this is what I named it when first I wandered in one summer night for Open Mic, on account of there being a stage and little tables with cloths and pretty candles burning. ‘Tenderhooks’ performed in this bar but not before whetting our party spirit with the delightful ‘Across the Sea’: a duo comprising a female powerhouse of a singer and a perfectionist of a male guitarist who also boasted some enviable locks. Well-placed, just before the main event, were ‘The DBs’ who evoked the same carefree vibe as ‘Tenderhooks’ themselves. Personally loved the folkiness of the fiddle and the jazziness of the sax.

The party started aptly with Tenderhooks’ ‘Bright Lights City’: ’80s disco with a hint of soul, before the title track itself of the album: ‘20-20 Vision’. Unlike the usual Tenderhooks fare, which tends to either be ‘feelgood’ or narrative, this song hovers on the periphery of politics. Referencing environmental concerns, (baseball) hats off to singer/songwriter Markus for the musical reminder that the onus is on us for the well-being of our majestic planet.

A charming piano intro, courtesy of Markus, heralded ‘Run into the Sun’ next; with some beautifully clear vocals from Markus also and some rousing guitar solos into the mix, this mellow rock song earned its place as my favourite.

Continuing with the buoyant mood was ‘Thinking Cap’, followed by ‘Smash It!’, both putting on show the unending array of instruments being energetically bashed and plucked for our entertainment.

‘No-one Gives a Monkies’ – definite blast from an ‘80s past with a bouncy ska/Britpop mix – preceded ‘Mermaids’: a quirky and gentle story about mermaids, which, as we all know, exist ‘at the bottom of the sea’.

And thus ended the album launch … I’m lucky to be in possession of Tenderhooks’ latest offering, but the good news for you is that it is now available on many digital platforms, including Spotify.

Actually, it didn’t end there … we were treated to a few more favourites from this happy, slick band because Markus is the ultimate showman, in the best possible sense of the word. 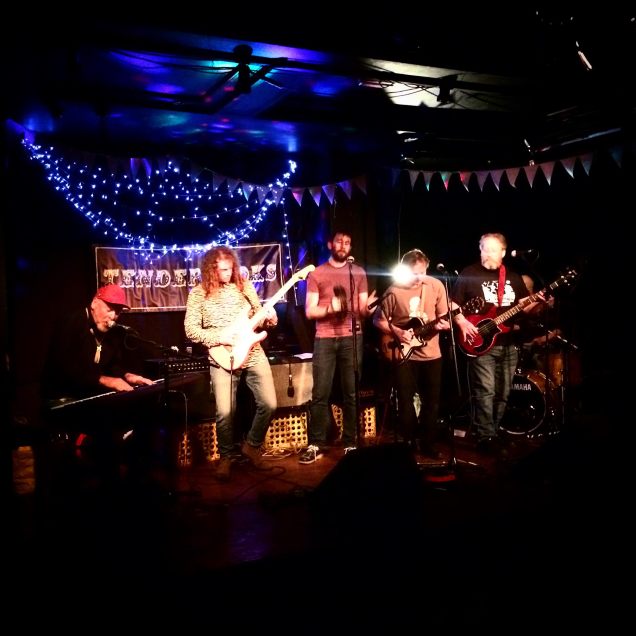 ‘20-20 Vision’ is Tenderhooks’ 7th album and is now available on many digital platforms, including Spotify.