Sinkholes, as you probably know, are holes in the ground. They are usually caused by ‘karst’ processes, for example, any combination of dissolution of soluble rocks, underground caverns and surface erosion. They can form gradually or suddenly and vary in size from 1-600m in depth and width. They are found the world over, but I have visited just one – Bimmah Sinkhole – which is 50m by 70m wide and approximately 20m deep. I am fortunate to have visited it twice, the second time being around two months ago.

It was the afternoon after the morning of trips to and from school to burn the journey into my short-term memory. Frankly, I was done with driving after near misses, getting lost and being tailgated, so I was happy to crawl into the backseat of the car belonging to my new friend with the beautiful headscarves, as she had lived here a while, loved driving and knew the way (more or less).

It was an hour away, but with petrol stops, toilet stops and changing-into-my-swimsuit stops, it took nearly two hours. Every stop involved the obligatory wander round the resident foodstore at the petrol station, as every stop was at a petrol station and when one is on a road trip, one must take advantage of available food for sale, because you never know. I don’t know what you never know, but it seems a reasonable excuse for buying those heavenly peanut cookies (in my case) because they are hard to come by.

We arrived mid-afternoon, spread between two cars as there were several of us and after a small blip at the end where we seemed a little lost – no, just mislaid perhaps – we arrived at Hawiyat Najim Park, home of said sinkhole. The first time I visited was with Rhiannon and Joseph when they were around nine and ten years old respectively, so around thirteen years ago and I don’t recall the park, so unless my memory is mistaken (or there are two sinkholes in Muscat), I imagine that this has been built around the sinkhole during that time. ‘Hawiyat Najim’ means ‘Falling Star’, because the locals believe (or believed at the time of naming the park) that a meteorite was the cause. To be fair, the commonly held theory of dissolving limestone is not conclusive and the sinkhole remains somewhat a mystery today, even with current seismic technology.

When I read travel blogs or peruse glossy travel brochures with their equally glossy pictures, I imagine the turquoise of the water to actually be the deepest turquoise of a convenient filter, but on gazing down at Bimmah, I felt humbled. These waters are turquoise … enhanced by sandy-coloured walls which surround this natural swimming pool protectively. The steps down, carved out to make this natural phenomenon accessible, blend perfectly and the unevenness of some steps gives the only man-made part of this structure a necessary naturalness. 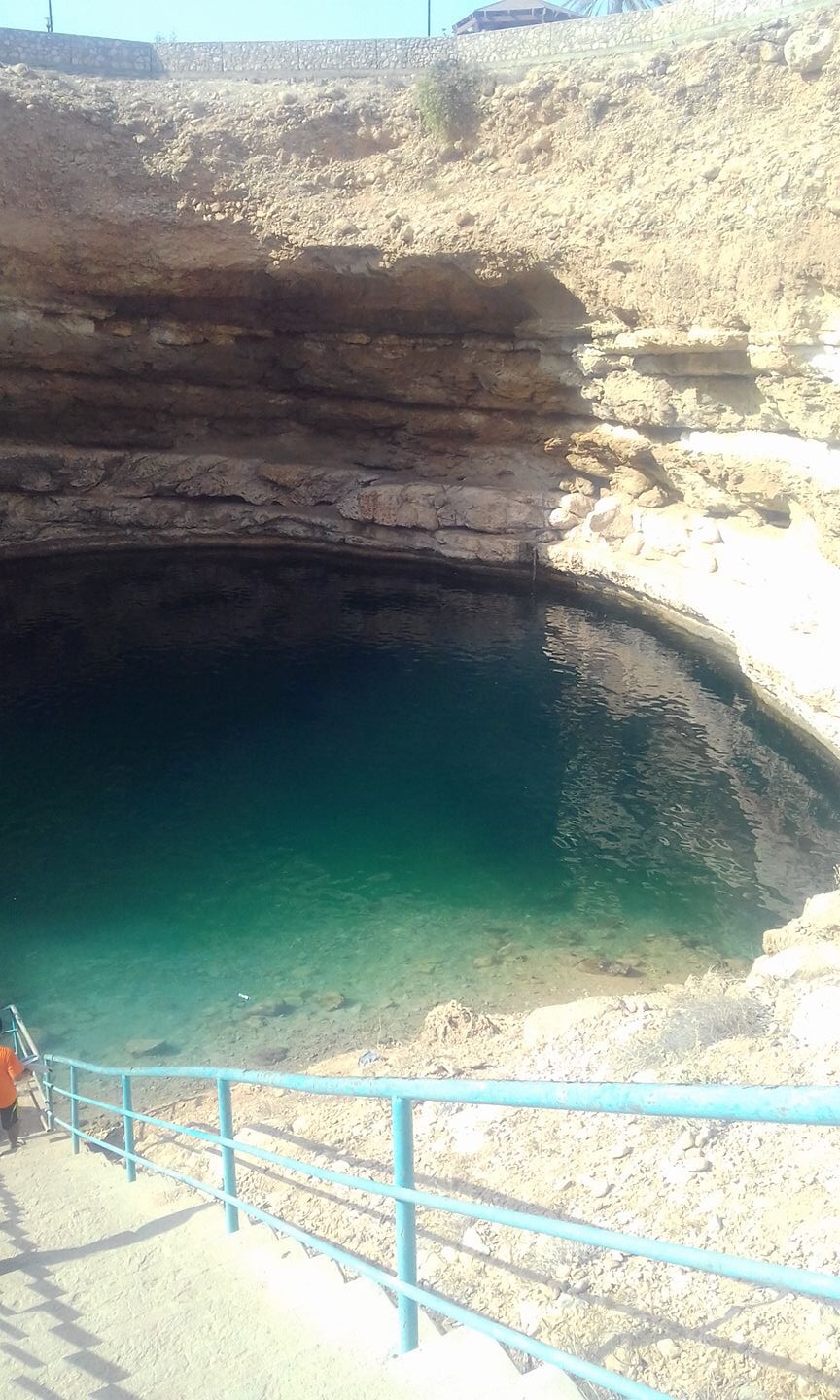 Despite the turquoise appearance, the water is clear. It is not unlike a mini-beach, with a shoreline, shallows and then deeper water as you wade in. It is easy to wade in; none of this ‘come on in – you’ll get used to the cold after a while’ business because the waters are positively balmy. There are rocks at the far end where you can jump off and had I known, I would have dispensed with the contact lenses beforehand but there we are.

Back in the UK, there is a trend for fish pedicures using Garra rufa fish, which are tiny toothless fish native to the Middle East and the Anatolia region, who just love to nibble hard skin off your feet. Bimmah Sinkhole, whose water is a mix of freshwater and seawater, is home to these fish. Sit on a rock in the shallows and these tiny, helpful creatures will gather around your feet and do their stuff. I totally abused their hunger and I reckon I experienced around OMR 50’s worth of fish pedicure.

But the sinkhole is not entirely round … swim to the left and you find yourself in a still, secluded lagoon. In fact, ‘80s movie The Blue Lagoon, starring Brooke Shields, came to mind as I swam round and the noises of families became more distant and the temperature dropped. Taking rest on a large rock I felt less alone, as more Garra rufa fish gravitated towards me but these were bigger and they were not content with nibbling my feet. Instead, they descended onto my thighs, where the skin was not hard and with bigger mouths, I started to feel the occasional pinch and wondering if I could actually be eaten alive if there were enough of them, I opted for rejoining the human race. I hauled myself up onto the rocks, so I could climb to my things and have a peanut cookie by way of consolation.

As sunset approached, so did growing hunger and so we packed up and walked to one of the wooden gazebos sprinkled throughout the park, so we could enjoy a picnic.

En route to the car, we walked amidst date trees and I want to say that we idly picked dates and chewed on their sweetness as we ambled into the sunset. But instead we gazed up at the dates, asking that age-old question: Why is the best fruit always so inaccessible? (By the way, just in case anyone is going to answer that, it is rhetorical.)

It was too hard to resist. We had to have a go. It started out as a gentle shake, which then grew into a prod with sticks; (apologies Regina Spektor https://youtu.be/oUObGCCXAfs ) which then turned into actual shoe-throwing right into the middle of the poor date tree which hitherto was only accustomed to people looking upon it lovingly and taking pictures with the sun setting behind it.

But we were rewarded with a whole bunch of dates falling into our laps. Well, into the dust. And they really weren’t nice. I shall continue to buy them from from the supermarket. Divine retribution, I feel, for abusing the date tree, especially after we had been so welcomed by nature at such a remarkably beautiful corner of the planet.

Bimmah Sinkhole at Hawiyat Najim Park: well worth a day of your life.