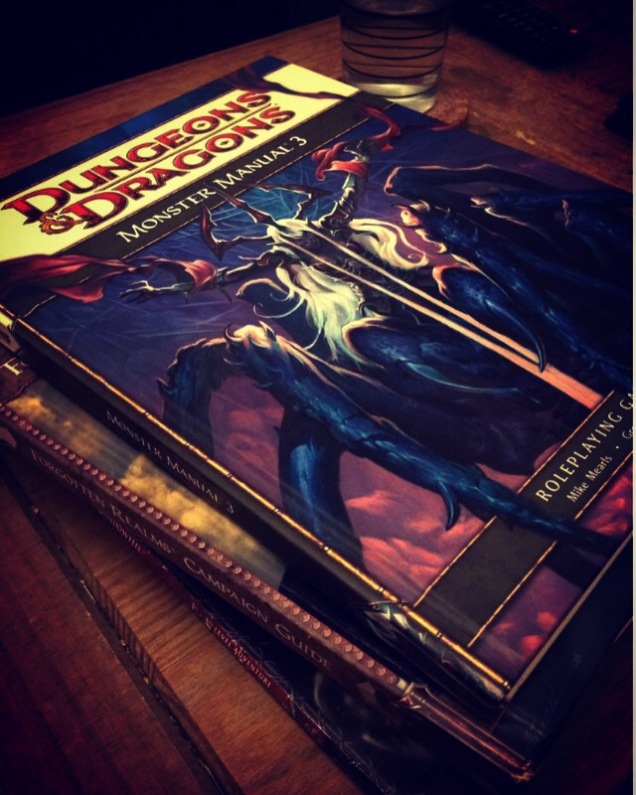 My husband announced that he was leaving me completely unexpectedly.

So, I retired to my son’s room (my son is at uni, as is my daughter . . . in fact, she was weeks into her first year when this happened. Empty nest syndrome is seriously painful when compounded with one’s husband leaving) and cried.

Then I remembered that I was running a Dungeons & Dragons fantasy role-play club (at my school) for the first time the following day, with which my (soon-to-be-ex) husband had promised to help me.

So, I emerged from the room of tears to request the latest edition of the hardback book associated with this cult and forced myself to ask which pages would be most helpful to me. I tried (ok, I didn’t try very hard) not to cry on said pages but I admit I left a few teary bumps on some pictures of wizards and the like.

And at some point I went to sleep and went to work the following day . . . and the next day . . . until finally we were told that Ofsted were going to pay us a visit! Woo hoo! So, that came and went and took my mind off things for a while and literally, as the last car containing the last inspector zoomed off-site, I began to feel seriously ill.

And I continued to feel seriously ill for the next two weeks. I didn’t really want to eat anyway, but in-between hubby leaving and Ofsted arriving, I had, at least, wanted lager and Maltesers. But now . . . nothing. I lost my sense of taste too, to the extent that chocolate was like cardboard and wine like vinegar. (You will note that I was paying particular attention to the important food groups during this time.)

Days off-sick always sound appealing when you’re healthy and at work, but when you are actually very ill and living on your own, you start to feel trapped in a grey cloud of doom. Which is how I felt when I took the decision to return to work, even though I didn’t actually feel any better. But fate had other ideas and in the middle of the night before my intended return to work, when my cough was rendering me sleepless and exhausted and the cat was wrongfooted (wrongpawed . . ?) by the sudden disturbance to her bed which was, in fact, my chest, I managed to find myself a lump. Yes, a lump. Alone, in the dark, in a room that is starting to show signs of mildew (hubby and I moved three weeks before his unexpected departure) some things seem like the end of the world.

I did return to work two days later. A stone lighter but with a mild case of depression and sense of impending doom. Everyone was full of Christmas spirit, so I did my best and then found out two weeks later that the lump was harmless. Then the children returned home from uni and it was Christmas and I counted my blessings.