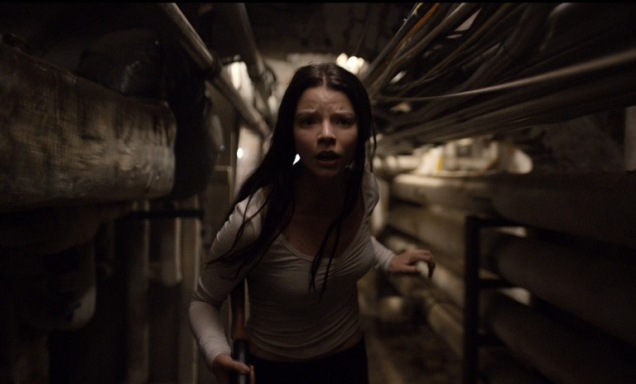 Three pretty schoolgirls on the cusp of adulthood – Claire (Haley Lu Richardson), Marcia (Jessica Sula) and Casey (Anya Taylor-Joy) – are abducted. Imprisoned, they fear the worst, but occasional bafflement provides some light relief from their understandable hysteria, when their captor, Kevin (James McAvoy), cycles through different personalities during his visits to the girls. It quickly transpires that he is suffering from a mental illness (dissociative identity disorder) and we are privy to his regular therapy sessions, presenting himself to his therapist (Betty Buckley) also, as a range of differing personalities. As the plot deepens, so his story is revealed but unexpectedly, Casey’s story also.

I have no doubt that McAvoy relished in the opportunity to play multiple parts in one hit. However, to do this well, requires commitment, experience and expertise and could have easily remained an unfulfilled challenge. To successfully develop the character of a main protagonist, one usually has the luxury of sticking with one personality and the end result is a depth that is, one hopes, tangible to the audience. But to develop a character that has multiple personalities is a big ask. Director M. Night Shyamalan did not expect McAvoy to display all 24 of Kevin’s personalities, but he did require him to bring several of Kevin’s alter egos to our attention and he does so, admirably. Providing some comedy moments with Hedwig, a child; Patricia, an older lady and Barry, best described as your favourite gay hairdresser, ‘Split’ is almost a one-man show with McAvoy taking centre-stage.

Richardson and Sula portray two teenage schoolgirls as you would expect. With typically perfect make-up, hair and clothes, they do a good job of conveying childlike innocence whilst seeming as helpless as baby rabbits in the headlights of an oncoming car. Casey emerges as the atypical teenage girl, with her own backstory to rival Kevin’s and Taylor-Joy brings intelligent reflection to her character, which moves cleverly from the background, as the quiet girl, to the foreground, as the one you secretly wager might just make it out alive. The implication that both Casey and Kevin have been on both sides of a ‘hunt’ is reflected in the current situation, where she and her friends are clearly victims of a hunt.

The abduction/imprisonment premise has been a popular one in recent years, so the success of such a story is dependent upon a twist; a difference; a crazy subplot. Shyamalan brings these secret ingredients to his tale of horror and the result is a movie that pushes you to the last inch of your seat. Graphic detail, though inhumanly horrific, is sparse but the continued threat of possible outcomes makes for a tense two hours.